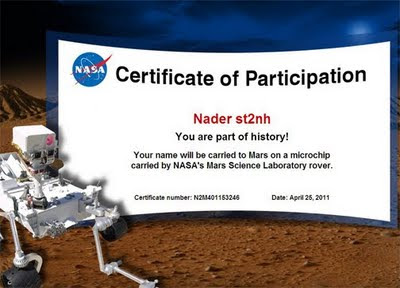 NASA are collecting names to be put on a microchip that'll be onboard the Mars Science Laboratory rover heading to Mars in the fall of 2011.

Some Radio Amateurs have been adding their call sign to last name field.

As well as having your call sign travelling around the Martian surface you also get a electronic commemorative certificate to print out.

The rover has an unusual connection with radio - it has special Morse Code indentations on its wheels that will spell out the initials JPL in Morse as it travels around Mars.
JPL stands for Jet Propulsion Laboratory, builders of the rover.

The first World’s cosmonaut Yuri Gagarin, visits club’s radio station U5ARTEK and operates as U5ARTEK/KEDR (“KEDR” was his call sign in the Space). 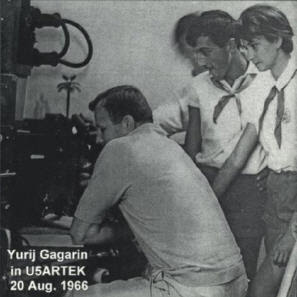 Due to the fact that the solar panels are covered, the satellite will be
powered only by the onboard battery. The satellite will run in low power mode.
This means that the transmissions will cycle ON/OFF. They will be ON for 40-60
seconds and OFF for 2 minutes.

145.950 MHz FM Downlink:
FM transmissions will cycle between a voice ID, select telemetry values, 24
international greeting messages in 15 languages and SSTV images. One of the
messages will be a conversation between Yuri Gagarin and ground control.

145.919 MHz CW Beacon
The CW transmissions will be callsign ID, select telemetry, and callsigns of
people actively involved with the ARISS program.

Note that the linear transponder will not be active during this event.
Posted by ST2NH at 4/08/2011 No comments: