The Code for the Apollo Moon Landings Is Now on GitHub

Suprisingly Funny the code for the Apollo Moon Landings Is Now on GitHub.

Computing has come a long way since the 1960s. The Apollo Guidance Computer (AGC) on board the Command Modules and Lunar Modules of the Apollo missions had about as much processing power as a simple electronic calculator. Yet through ingenuity—and thousands and thousands of lines of code—NASA and MIT engineers succeeded in safely landing a person on the moon.
The MIT Instrumentation Laboratory had to develop a new type of software technology for the Apollo space program. Core rope memory, a now antiquated form of read-only memory, was used with a unique assembly programming language to write the code that ran the Apollo Guidance Computer. 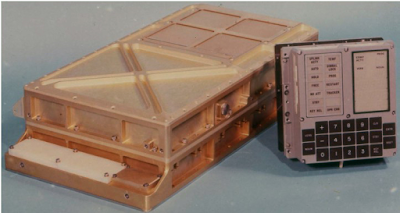 On July 7, however, former NASA intern Chris Garry uploaded the entire AGC software to the code-sharing site GitHub, making the information available to thousands more people. And it wasn't long until the folks on thesubreddit r/ProgrammerHumor got ahold of it and started picking it apart

As interest in the code exploded, people soon realized that the comments and labels left by the original coders, full of jokes and cultural references, are more amusing than the software instructions themselves. The instructions for the master ignition burn is titled, BURN_BABY_BURN- -MASTER_IGNITION_ROUTINE, for example. There is even an explanation of the name for the burn sequence

The effort made the code available to any researcher or hobbyist who wanted to explore it. Burkey himself even used the software to create a simulation of the AGC:


The Charming Genius of the Apollo Guidance Computer
Source:PM

Kerbal Space Program is hard. Why? Because real life is hard. You know how people always say “It’s not rocket science” in that annoying, pedantic tone? Well in this case, KSP is quite literally rocket science.
Kerbal Space Program is one of the best of its kind. It’s an adult Lego set (or K’Nex set) given life. It’s creative, it’s complicated, and when you succeed in KSP it’s not because the game let you succeed—it’s because you actually learned something new and applied those concepts appropriately.
PC-world review
Posted by ST2NH at 7/07/2016 1 comment:

Email ThisBlogThis!Share to TwitterShare to FacebookShare to Pinterest
Labels: JUNO

As NASA's Jupiter-bound Juno spacecraft swung past Earth on Oct. 9, 2013, amateur radio operators around the world sent a Morse Code "HI" to the spacecraft. Would Juno hear their call?

Published on Dec 10, 2013 During its close flyby of Earth, NASA's Jupiter-bound Juno spacecraft listened for a communication from amateur radio operators transmitting from locations around the world. This video clip depicts results, the "dits" and the "dahs," of this high-flying social experiment. The full image caption for this movie is available at: http://photojournal.jpl.nasa.gov/cata... A four-minute documentary depicting the efforts of a few of the amateur radio operators who participated in the event can be seen at: http://youtu.be/_yqHy_MpNiQ

Credit: NASA/JPL-Caltech/University of Iowa
Posted by ST2NH at 7/06/2016 No comments:

Soyuz Gets a Makeover

Soyuz-MS will now sport a powerful communications system, dubbed EKTS, which can connect the crew to mission control in Korolev near Moscow via satellite. Previously, cosmonauts and astronauts on Soyuz could talk to their peers on the ground only when in direct view of ground stations on the Russian territory. The large antenna array of the EKTS system "on the roof" of the Soyuz-MS is the most prominent new feature on the ship's exterior. Thanks to three available Russian Luch-5 satellites, the crew will be able to stay in touch with mission control around 83 percent of the time each day. The Soyuz will be also able to communicate via American TDRS and European DRS satellites. 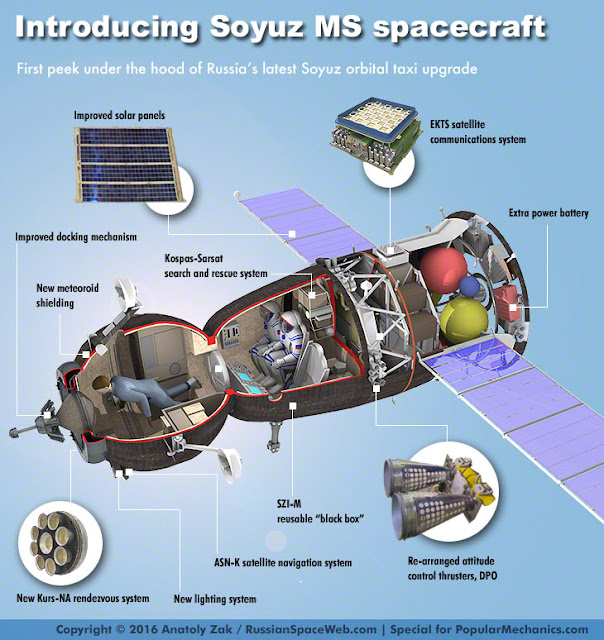 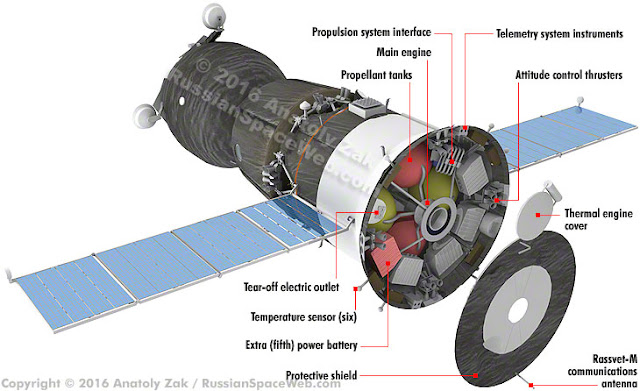 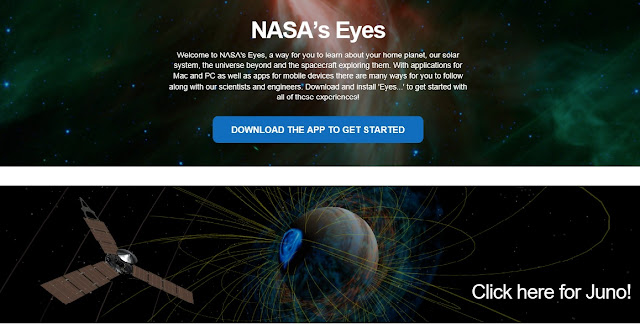 Email ThisBlogThis!Share to TwitterShare to FacebookShare to Pinterest
Labels: JUNO