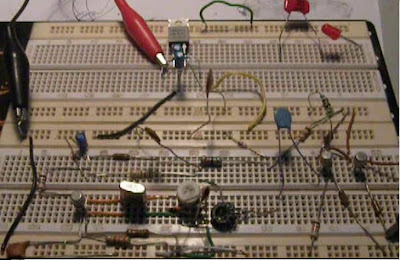 Popular and effective overtone oscillator !
The Butler oscillator.
Tested on a breadboard .
Frequency stability is acceptable with this unshielded circuit.
The warm up drift in range of 100 - 200 Hz.then after it was stable with
slight drift of 2 to 3 Hz.
No neutralized inductance use in parallel with the crystal.

China has launched its first female space traveller aboard a rocket that blasted off from the Gobi Desert on one of the country's most ambitious space missions yet.

Liu Yang, a 34-year-old air force pilot, and two male taikonauts, Jing Haipeng and Liu Wang, were aboard the Shenzhou 9 spacecraft as it left the Earth on Saturday 16 june 2012 on a voyage that will see it dock with an orbiting space module

Two of the crew will live and work inside the bus-sized Tiangong 1 space module for a week to test its life-support systems while the third will remain in the capsule to deal with unexpected emergencies as China bids to become only the third nation with a permanent base orbiting Earth.

State media have said the mission will last about 10 days before the taikonauts travel back to Earth in the capsule that will land in the grasslands of western China with the help of parachutes.