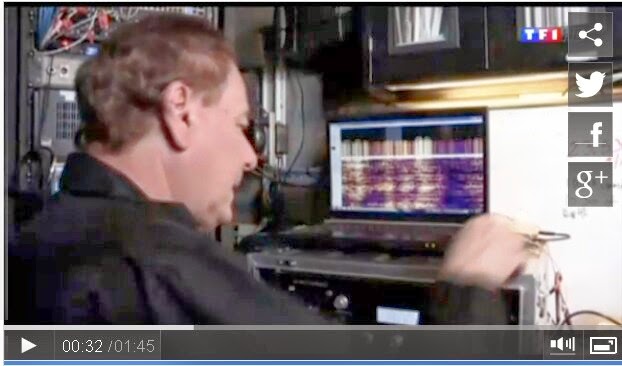 US Navy personnel helping to look for missing Malaysia Air Flight MH370 are using the signal-processing and analysis package Spectrum Laboratory by Wolf Buescher, DL4YHF, to analyze recently detected 37.5 kHz “pings” that may be from the missing plane’s “black box.” Some Spectrum Laboratory screen shots as seen aboard the Australian Defense Vessel Ocean Shield were shown on TV. The US Navy personnel are guests aboard the Australian ship. VLF experimenter Warren Ziegler, K2ORS, said the software is the same package Amateur Radio experimenters used recently to detect transatlantic signals on 29 kHz.

“Wolf’s package is very first-rate software, and I know that there have been other professional uses, but this was quite an interesting one!” Ziegler said.

The software began as a simple DOS-based FFT program, but it is now a specialized audio analyzer, filter, frequency converter, hum filter, data logger and more, and it is available for download from DL4YHF’s Amateur Radio Software site.

Buescher said he was skeptical about the initial “ping” detection by one of the search vessels, but now, he says, “the spectrogram taken by the US team aboard Ocean Shield is convincing.” He said a screenshot from Australian TV clearly shows the “bip-bip-bip” ultrasonic bursts or pings, “just as they should look,” rather than a “just a wobbly carrier that comes and goes.”

“In slow-CW terms, it would be an ‘outstanding signal.’” Buescher said. “Now keeping fingers crossed that the [“black box”] batteries last a bit longer than specified. The experts say the pinger’s battery usually degrades slowly, instead of going QRT abruptly.”

Email ThisBlogThis!Share to TwitterShare to FacebookShare to Pinterest
Labels: Software


Sentinel-1A, the first satellite for Europe's environmental monitoring Copernicus programme, is being launched from Europe's Spaceport in Kourou, French Guiana on 3 April 2014. It will be lofted into orbit on a Soyuz rocket.

This animation shows some of the critical stages delivering Sentinel-1 into orbit around Earth. After separating from the Fregat upper stage, the satellite takes around 10 hours to deploy its 12 m-long radar and two 10 m-long solar wings. This deployment sequence is unique, choreographed to ensure that both deploy in the safest possible way. This approach also allows power from the wings to be available as soon as possible so that the satellite is independent.

Delivering vital information for numerous operational services, from monitoring ice in the polar oceans to tracking land subsidence, Sentinel-1 will play a key role in the largest civil Earth-observation programme ever conceived.

The animation is set to a track called Sentinel by Mike Oldfield, a world-renowned musician and big space fan.


The biggest civil Earth-observation programme ever conceived has begun with the launch of a radar satellite from French Guiana.

The EU's Sentinel-1a spacecraft will be followed into orbit by a fleet of other satellites in the coming years.

Together, they will return an unprecedented volume of data on the state of the planet.
Posted by ST2NH at 4/04/2014 1 comment:

Why we need radar satellites ?


The launch of the first Sentinel-1 satellite marks a new paradigm in Earth observation focusing on operational missions to support users for decades to come. This first satellite for Europe's environmental monitoring Copernicus programme carries an advanced radar to image Earth's surface no matter what the weather or if it is day or night. Olaf Trieschmann from the European Maritime Safety Agency talks about the need for radar satellites and how data from Sentinel-1 will be used to monitor oil spills and for maritime surveillance. ESA's Josef Aschbacher talks about how the wide range of services offered through Copernicus will make a step change in the way we manage the environment.