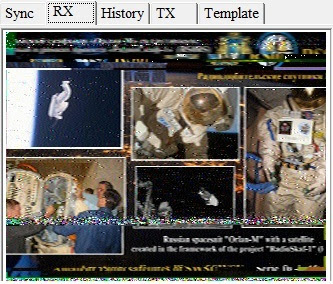 all time in UTC

The wav file received by  JA0CAW station.
Tested and posted at  JE9PEL, Mineo Wakita blog.
http://www.dropbox.com/s/wnyks1idlat3ppt/Mon_180616_104100.WAV
I retested DSLWP-B  audio file,  played it via Audacity software on PC  and the audio decoded by WSJT on other PC .result is ok ,but  infrequently decoded. 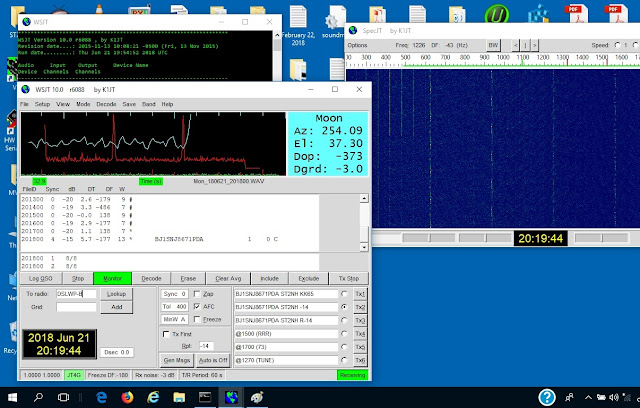 Fluorescence map from NASA and The Holy Quran

Chapter 24 The Light - - An-Noor: Verse 35
Allah is the Light of the heavens and the earth. The Parable of His Light is as if there were a Niche and within it a Lamp: the Lamp enclosed in Glass: the glass as it were a brilliant star: Lit from a blessed Tree, an Olive, neither of the east nor of the west, whose oil is well-nigh luminous, though fire scarce touched it: Light upon Light! Allah doth guide whom He will to His Light: Allah doth set forth Parables for men: and Allah doth know all things. 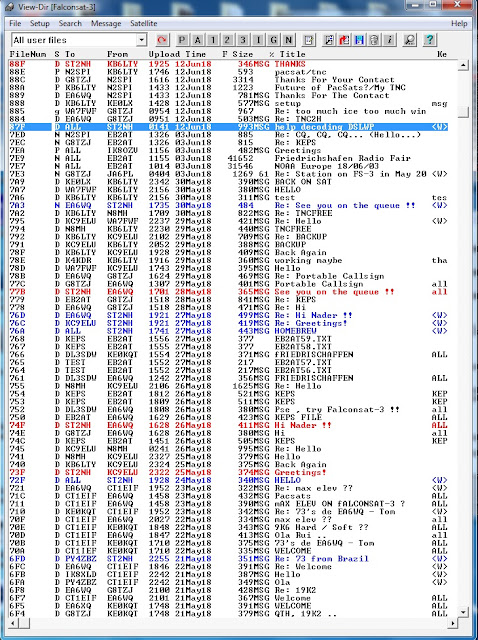 DSLWP-B’s journey to the Moon: part I

DSLWP-B’s journey to the Moon: part I

As you may well know, on May 20 a CZ-4C rocket launched from Xichang, China, to deliver Queqiao, the Chang’e 4 relay satellite, to the Moon. Queqiao is a communications relay satellite designed to orbit the L2 point of the Earth-Moon system, supporting the future Chang’e 4 rover that will land on the far side of the Moon. From the L2 point, Queqiao has a good view of both the Earth and the far side of the Moon.
This launch was shared by the DSLWP-A and -B microsatellites, also called Longjiang 1 and 2. These two satellites are designed to be put on a 200 x 9000km lunar orbit and their main scientific mission is a proof of concept of the Discovering the Sky at Longest Wavelengths experiment, a radioastronomy HF interferometer that uses the Moon as a shield from Earth’s interferences.

Introduction
This material is intended to assist Windows PC users who desire to experiment in decoding the
satellites that utilize GNU Radio software for gathering telemetry data. Windows users are
targeted because that Operating System dominates the applications used by ham radio
operators and most of them do not possess a Linux PC. This guideline is intended to advise the
targeted audience on procedures for utilizing their existing Windows hardware to safely boot
the Linux operating system for purposes of running the GNU Radio SDR applications.

05/21/2018 China has launched two microsatellites into a lunar transfer orbit. They launched as secondary payloads with the Quequiao relay satellite on May 20, in conjunction with the Chang’e 4 mission to the far side of the moon. Once in lunar orbit, DSLWP-A1 and DSLWP-A2 (DSLWP = Discovering the Sky at Longest Wavelengths Pathfinder) — also known as Longjiang-1 and Longjiang-2 — will test low-frequency radio astronomy and space-based interferometry. They carry Amateur Radio and educational payloads, but not a transponder. The Chang’e 4 mission will be the first-ever attempt at a soft landing on the far side of the moon.
Following deployment, signals from the DSLWP satellites were received by radio amateurs in Brazil, Chile, and the US, as well as by many others around the world. Harbin Institute of Technology (BY2HIT) developed and built the DSLWP spacecraft and is overseeing that mission. The two microsats eventually will enter a 300 × 9,000 kilometer elliptical orbit. Each satellite carries VHF/UHF SDR transceivers for beacon, telemetry, telecommand, and digital image downlink, plus a GMSK-JT4 repeater. Onboard transmitting power is about 2 W.
The astronomy objectives of the two spacecraft are to observe the sky at the lower end of the electromagnetic spectrum — 1 MHz to 30 MHz — with the aim of learning about energetic phenomena from galactic sources, using the moon to shield them from earthbound radio signals.
An open telecommand protocol on the spacecraft is designed to allow radio amateurs to send commands to take and download images. DSLWP-A1 downlinks are 435.425 MHz and 436.425 MHz; DSLWP-A2 downlinks are 435.400 MHz and 436.400 MHz. They will use 250/500 bps GMSK using 10 kHz wide FM single-channel data, with concatenated codes or JT4G. JT4 uses four-tone FSK, with a keying rate of 4.375 baud; the JT4G sub-mode uses 315 Hz tone spacing and 1,260 Hz total bandwidth.
The Queqiao communications relay satellite is required for the lunar far-side landing to facilitate communication with a not-yet-launched lander and rover because the moon’s far side never faces Earth, and some significant scientific measurements from the dark side of the moon require real-time contact with Earth. Queqiao was developed by the China Academy of Space Technology (CAST).
Harbin Institute of Technology Amateur Radio Club hopes that radio amateurs will get involved with the DSLWP mission, and QSL cards have been designed for different flight phases for amateurs who successfully receive telemetry or make contact.
source http://www.arrl.org/ 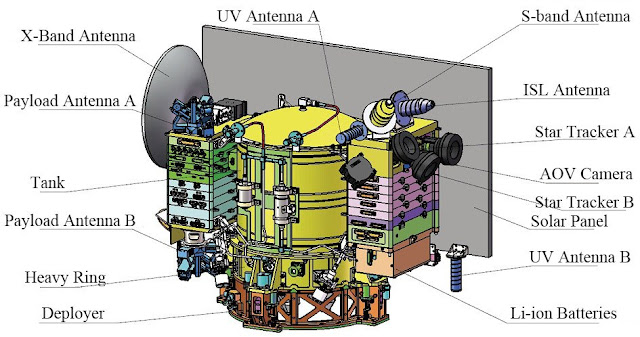 
Here is a collection of configurations of radio amateurs who have successful DSLWP downlink reports. 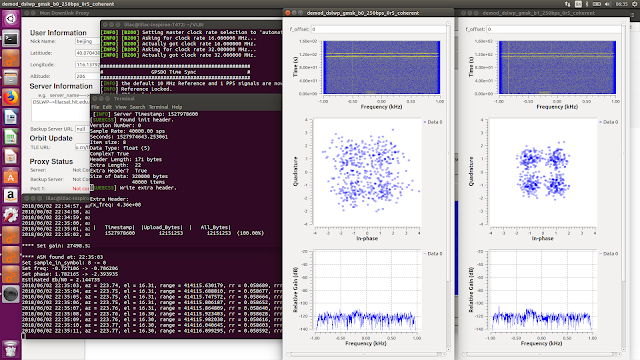 American satellite started transmitting 46 years after being abandoned in 1967

After learning that a satellite that’s been silent for decades has suddenly started sending out new signals you may, of course, suspect that the device has been hijacked by aliens now trying to communicate with Earth. Perhaps they’re warning us that they are planning an invasion!
It’s possible such thoughts ran through the mind of Phil Williams, an English amateur radio astronomer based in Cornwall, who was the first person to pick up the strange signals coming in as “ghostly sounds” in 2013. It turned out that the transmitted messages were coming from an abandoned LES1 satellite, but experts needed three more years to authenticate that this was indeed the American satellite that was “lost” in 1967.
LES1 was one of several units produced and launched into space by the Lincoln Laboratory at the Massachusetts Institute of Technology (MIT), in between 1965 and 1967. These units, primarily designed for testing new satellite communication technology, were each labeled with numbers, running from LES1 to LES9.
As it turned out, the launch of the first four satellites did not go that well. LES1, in particular, failed to reach most of its planned objectives. Contact with the satellite was completely lost two years after its launch, and it has ever since revolved around our planet, staying entirely out of touch. Things went better for the later four, LES5 to LES9 units; the LES7 unit was canceled as the program was then coming to an end and there was no more funding for it.


What surprised everyone in 2013 is that LES1 started sending signals in repeats of every four seconds. Phil Williams has suggested that a failure in one of the device components is what perhaps caused it to start sending signals again.
The designated frequency of the signal is 237 MHz. However, the satellite manages to send the transmissions only when its solar panels are directly exposed to light. The signal reportedly ceases once the craft’s panels fall into the shadow of the satellite’s own body. “Tension in the solar panels jumps, and it can do the phantom signal,” Williams has stated.
It is probable that the satellite’s on-board battery is entirely diminished by now, so what powers the transmission of the signals is a bit of a mystery. As to whether LES1 poses any threat, there is apparently nothing to fear. This is yet one more piece of space junk spinning around in orbit.

What’s more striking is that the electronics used in LES1 were produced five decades ago and though they’ve been exposed to the severe conditions of space, they still appear to be in some sort of working order. And five decades ago is a long time in terms of the technology and its development.

LES1 was launched more than a decade before the probe Voyager-1 was launched into space to explore the outer realms of the solar system. And the electronics used back in the 1960s were way simpler than those used since, hence, perhaps, their durability.

The news of this out-of-date satellite coming back online after so much time staying silent has certainly surprised everyone within the scientific community. The satellite was launched February 11, 1965, from Cape Canaveral. It ceased sending signals just two years later. Still, this is not the only case of a satellite having been lost and then found again.